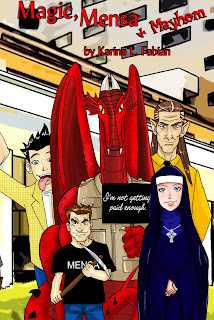 It should have been a cushy job: Vern, the dragon detective, and his partner, the mage Sister Grace, are given an all-expense paid trip to Florida to chaperone a group of Magicals at a Mensa convention. Then the pixies start pranking, the Valkyrie starts vamping and a dwarf goes to Billy Beaver's Fantasyland hoping to be "discovered." Environmentalists protest Vern's "disrupting the ecosystem," while clueless tourists think he's animatronic. When the elves get high on artificial flavorings and declare war on Florida, it turns into the toughest case they aren’t getting paid for.
Read The First Three Chapters on MyEbook.com
Read the Reviews:

Karina Fabianʼs premiere novel from Swimming Kangaroo Press, Magic, Mensa and Mayhem, made me laugh, everything from quiet chuckles to outright snorts. MM&M brought to mind Craig Shaw Gardnerʼs humorous Tales of Wuntvor, with its phraselong Elvish names and clash of magical races, each with its own culture and quirks that would make a UN official tear out his or her hair. The main character and narrator, a cranky dragon named Vern and his partner, an Irish Faerie nun named Sister Grace, negotiate a MENSA convention in Central Florida in an effort to keep the peace between the Mundane world and the delegates from Faerie, all the while trying to discover the reason a perpetrator has set a host of Brownies loose in an unbridled cleaning frenzy. There are enough puns to elicit groans from even the sternest critic. A quick read and an enjoyable one.


--Jody Lynne Nye, author of An Unexpected Apprentice and co-author of the Myth, Inc novels

Religion and humor suffuse this well-imagined and densely plotted comedic mystery, based on a short story of the same title. Cursed by St. George to serve the Faerie Catholic Church, dragon detective Vern now sleuths in the mundane world. His latest (unpaid) assignment is to babysit a group of faeries attending a Mensa meeting. Vern quickly has his claws full juggling crises, from invisible brownies to two elves whose rivalry threatens to become interdimensional war. Distinctly memorable and occasionally silly supporting characters, from Brunhilde the Valkyrie to Native American trickster Coyote, steer the action. While the conclusion sticks perilously close to genre formula and the narrative is jumpy throughout, most readers will forgive the clichés (and Vern’s groan-worthy puns) and chuckle all the way through.
--Publisher's Weekly, Feb 2009

If you're reading this site, it means one of several things:

--You're a Faerie in the Mundane universe looking for help from one of your own kind.

--You're a Mundane with trust issues.

--You're goofing off at work...again.

Regardless, you've come to the right place: The Dragon Eye Private Investigations Agency.

I'm Vern, a professional problem solver in two universes and yes, a for-real dragon. Sister Grace, my partner, is a mage from the Faerie Catholic Church. Need high-powered magic or magic from On High? She's your nun.

We'll handle just about any case that pays and, being a dragon, I'm not particular about how I get paid. Cash or carrion, I'm your dragon. We do everything from find lost pets to save the universe--sometimes at the same time. Hey, I'm a dragon. I can multi-task. Karina Fabian novelizes our cases. Check them out on this site, or better yet, check them out at the library or Amazon. It helps the dragon, and that's a good thing.