Dragons are not Inherently Evil

Once again, Karina has gotten into a discussion about dragons and how she should not write the adventures of one because they are creatures of evil.

This, of course, hearkens back to Revelations, to whit:
Then another sign appeared in heaven: an enormous red dragon with seven heads and ten horns and seven crowns on its heads.Revelation 12:3

So, naturally, I'd like to draw your attention to Exhibit A:
But say, you don't buy that.  After all a dragon is a dragon, no matter how many heads, right?  And if the bible says the dragon is  the symbol of evil, then all dragons are evil.

Well, let's talk serpents, shall we?  It wasn't a dragon that tempted Eve, but a serpent, right?  And when the Israelites complained against God, what invaded their camp?  Serpents.  But I see serpents all over this earth.  You keep them as pets--even good Christians do.  But some are "good snakes," you say?

So some snakes are good, but all dragons are bad?  Speciest, if you ask me.

Oh, but let's look a little further.  When the Israelites were being attacked by the serpents, what did Moses do?  Drive them out?  No--he took it to God:

So, God used the serpent for His will.

Posted by Karina Fabian at 7:00 AM No comments:

Email ThisBlogThis!Share to TwitterShare to FacebookShare to Pinterest
Labels: are dragons evil, dragoneyepi, dragons as symbols of evil, dragons in the Bible

What I did in school

One of the kids from Church asked me to go to show-and-tell this week.

The teacher had a fire extinguisher handy.  Seriously?  I may be from the Middle East, but I have more self-control than that.  Anyway, the kids were sufficiently impressed and I used my charm on Mrs. Willoughby, so it turned out all right.  The kids asked the usual second grade level of questions--no Mensans there*--and then I invited them to pet me.

That's why I bother with these things, you know.  Who needs a masseuse when you can have 30 little kids give you a good scale rub?  and the little hands are perfect for scratching behind my cheek crests.  No, I do not thump my leg like a dog.  I can, however, be coaxed into a purr. It always ends too soon, but I go home happy and relaxed.

Stan calls me a sensualist.  I just tell him it's a dragon thing.  He wouldn't understand.

*In Magic, Mensa and Mayhem, Vern does show-and tell for the kids of Mensans.  That's where he learned his tail spikes are called thagomizer.
Posted by Karina Fabian at 7:00 AM 1 comment:

Email ThisBlogThis!Share to TwitterShare to FacebookShare to Pinterest
Labels: dragons

Karina recently lent me a book by Larry Correia called Monster Hunter International: Legion.  Great book, very diverting, and made me glad I didn't have the problems these guys have had.  If you like lots of action with heavy-duty baddies and heavy artillery, go check it out. 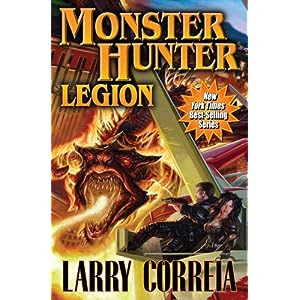 I just want to talk about the dragon.  (SPOILER ALERT)

"Management" lives in a cave deep under a ritzy hotel where he is surrounded by gold jewels, fancy cars piled high--and I do mean piled; it's not like he was going to drive them--precious works of art, expensive wines...  You name it, he had it, or sold it off when he got bored.  He also had super high-tech stuff and owned major stock in companies.  (Loved the comments, "Yes, but they are using techonolgy that I own 40 percent of..." etc.  Knowledge wasn't even at his clawtips--he had bluetooth and voice commands for that.  Oh, this dragon was equipped.

I know what I want to be when I outlive the St. George's geas!

I so want to be Management, but even better for me, there's no such thing as PUFF (government bounty for monsters in Correia's books), so I can come and go as I please.

Check out Larry Correia's book: http://www.amazon.com/Monster-Hunter-Legion-Limited-Edition/dp/1451637977
Posted by Karina Fabian at 7:00 AM No comments:

Email ThisBlogThis!Share to TwitterShare to FacebookShare to Pinterest
Labels: dragoneyepi, larry correia, monster hunter legion, what do dragons dream about

Spoiler Alert:  If you've not read "Coyote Fires," then go check it out now.  http://coyotefires.karinafabian.com.  The fundraiser is over, so just enjoy the story before Karina takes it down.

Read it?  Good.  Then let me make this clear.  I hatched that phoenix egg by breathing fire on it.  That's it.  I'm as much a mother as an incubator is.  And labor jokes aside, it was hard and I was tired.  So don't go calling me "Momma."

Incidentally, we made $234, not counting the money made from book sales, which MuseItUp needs to get back with us on.  Thanks to all who donated:

If you're reading this site, it means one of several things:

--You're a Faerie in the Mundane universe looking for help from one of your own kind.

--You're a Mundane with trust issues.

--You're goofing off at work...again.

Regardless, you've come to the right place: The Dragon Eye Private Investigations Agency.

I'm Vern, a professional problem solver in two universes and yes, a for-real dragon. Sister Grace, my partner, is a mage from the Faerie Catholic Church. Need high-powered magic or magic from On High? She's your nun.

We'll handle just about any case that pays and, being a dragon, I'm not particular about how I get paid. Cash or carrion, I'm your dragon. We do everything from find lost pets to save the universe--sometimes at the same time. Hey, I'm a dragon. I can multi-task. Karina Fabian novelizes our cases. Check them out on this site, or better yet, check them out at the library or Amazon. It helps the dragon, and that's a good thing.